NEW YORK CITY — A bus carrying mostly single adult male immigrants from Texas arrived at the Port Authority of New York City Friday morning — where they were greeted by volunteers who handed out burritos — — Gov. Greg Abbott continues to disperse record-breaking numbers of border-crossers and illegal aliens arriving in his state into Democratic-run “sanctuary cities.”

New York City officials appeared unprepared for the arrival of the migrants, or at least lacked communication and coordination to receive them, as the Port Authority initially did not have a gate to allow the bus to park, and Port Authority employees were unaware of the planned arrival.On Friday morning, the bus circled between 8th and 9th avenues until it was finally possible to park at Gate 14 around 7:30 a.m.

“As President Biden continues to refuse to acknowledge the crisis created by his open border policies, Texas has had to take unprecedented action to keep our community safe,” Gov. Abbott said in a statement.

“In addition to Washington, D.C., New York City is an ideal destination for these immigrants, who have access to the wealth of city services and housing that Mayor Eric Adams touted in the sanctuary city,” Abbott said. “I hope he delivers on his promise to welcome all migrants with open arms so that our overcrowded and overwhelmed border towns can be relieved.”

When the bus arrived, Breitbart News witnessed passengers disembark after a three-day journey from Texas and were greeted by a handful of volunteers. A volunteer was wearing a New York City Immigrant Services T-shirt, but no city employees appeared to be present.

The greeter handed the migrants a bag bearing the logo of the humanitarian aid organization Save the Children; however, there appeared to be fewer than 10 children and no more than five women in the group. The remaining 60-odd passengers on the bus were single men between the ages of 20 and 40.

Volunteers led the group through the Port Authority, pulled them to the bus stop’s entrance, and handed out burritos. Some migrants were offered transportation to other places, but it was unclear where. 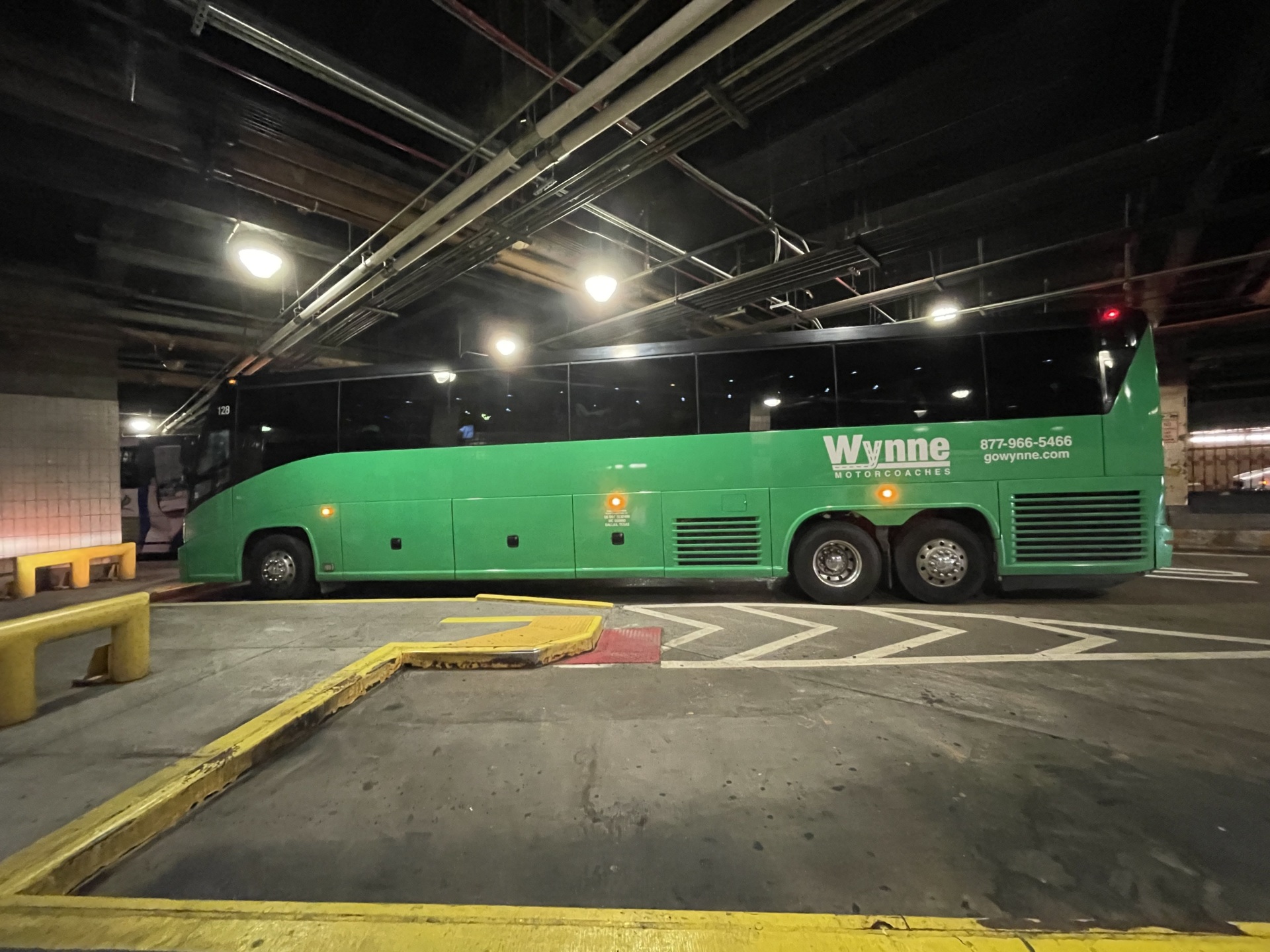 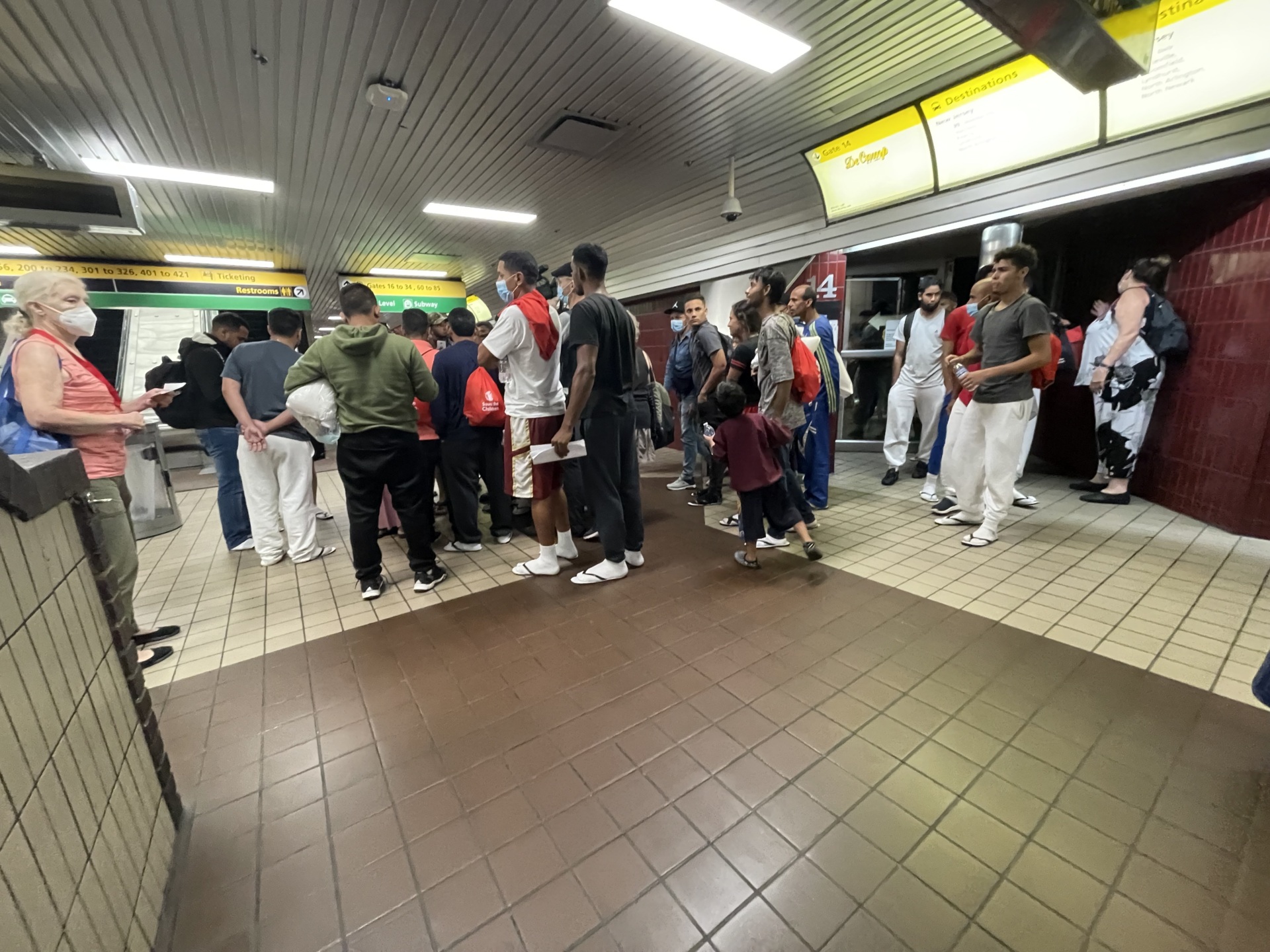 A migrant who identified himself as Alfonzo, who arrived alone, told Breitbart News he traveled from Venezuela via Mexico to Texas, where he was put directly on a bus bound for New York City.

He left his wife and children in Chile, explaining that he came to the United States alone and planned to take them later. He has no family or relationships in the United States and does not speak English. He brought a bag with some toiletries and a pillow, and $130.

Alfonzo told Breitbart News that now is a good “opportunity” to come to the US, explaining that he does not believe he will be admitted under former President Trump’s administration, specifically mentioning the wall on the southern border as a barrier to entry . He said locals in Mexico accepted the money that led him to the border.

Alfonzo said he was looking for a job but had never been to New York City or the United States. He had no place to stay and was not informed of any lodging services or resources.

While Democratic officials support illegal immigration through their broad sanctuary-city policy, which protects illegal aliens from arrest and deportation by Immigration and Customs Enforcement (ICE), a few warn that immigrants from Texas Buses will overwhelm their city’s public resources.

For example, New York City Mayor Eric Adams (D) has implored Biden to “immediately provide additional federal resources” to deal with the surge in illegal immigration. In a separate statement, Adams told New Yorkers to “join” their cities by flooding them with border-crossers and illegal alien arrivals, and putting pressure on infrastructure, hospitals, schools and communities.

“Everyone’s barriers are affected,” Adams said. “So we have to spread the word about our initiative through our ability to help our neighbors. We need everyone to be involved.”

Gov. Abbott has publicly invited Mayor Adams to visit the southern border, insisting that the “sanctuary city” mayor has witnessed “the level of chaos created by Biden’s open border policies.”

“I wish they would [visit] Because of public officials across the country, they really need to be aware of the level of confusion that Biden’s open border policies have created,” Abbott said on Fox News on Thursday.

“They’re outraged at thousands of people coming into their communities in the last few months? Listen, in any department in Texas, we’re seeing over 5,000 people a day in that department,” Abbott said. Go on.

Likewise, Washington, D.C. Mayor Muriel Bowser last month asked the National Guard to deal with what she called a “humanitarian crisis” that has seen more than 6,000 immigrants from Texas since April sent to the capital.

Bowser, a staunch proponent of the region’s sanctuary city policy, has claimed immigration buses are the “tipping point” for Washington, D.C., although they pale in comparison to the levels of illegal immigration that U.S. border towns are forced to contend with. Biden administration.

In Texas border towns alone, nearly 130,000 border crossings and illegal aliens were apprehended in June. More recently, in the small town of Normandy, Texas — with just 29 residents — about 400 border-crossers and illegal aliens entered the area this month.

John Binder is a reporter for Breitbart News. Send an email to jbinder@breitbart.com.follow him on twitter here.